The most commonly used type of all the sensors are those which detect Temperature or heat. These types of temperature sensor vary from simple ON/OFF thermostatic devices which control a domestic hot water heating system to highly sensitive semiconductor types that can control complex process control furnace plants.

We remember from our school science classes that the movement of molecules and atoms produces heat (kinetic energy) and the greater the movement, the more heat that is generated. Temperature Sensors measure the amount of heat energy or even coldness that is generated by an object or system, allowing us to “sense” or detect any physical change to that temperature producing either an analogue or digital output.

The two basic types of contact or even non-contact temperature sensors can also be sub-divided into
the following three groups of sensors, Electro-mechanical, Resistive and Electronic and all three types are discussed below.

The Thermostat is a contact type electro-mechanical temperature sensor or switch, that basically consists of two different metals such as nickel, copper, tungsten or aluminium etc, that are bonded together to form a Bi-metallic strip. The different linear expansion rates of the two dissimilar metals produces a mechanical bending movement when the strip is subjected to heat.

The thermostat consists of two thermally different metals stuck together back to back. When it is cold the contacts are closed and current passes through the thermostat. When it gets hot, one metal expands more than the other and the bonded bi-metallic strip bends up (or down) opening the contacts preventing the current from flowing.

Snap-action type thermostats are commonly used in our homes for controlling the temperature set point of ovens, irons, immersion hot water tanks and they can also be found on walls to control the domestic heating system.

Although very cheap and are available over a wide operating range, one main disadvantage of the standard snap-action type thermostats when used as a temperature sensor, is that they have a large hysteresis range from when the electrical contacts open until when they close again. For example, it may be set to 20oC but may not open until 22oC or close again until 18oC.

So the range of temperature swing can be quite high. Commercially available bi-metallic thermostats for home use do have temperature adjustment screws that allow for a more precise desired temperature set-point and hysteresis level to be pre-set.

The Thermistor is another type of temperature sensor, whose name is a combination of the words THERM-ally sensitive res-ISTOR. A thermistor is a special type of resistor which changes its physical resistance when exposed to changes in temperature.

Thermistors are generally made from ceramic materials such as oxides of nickel, manganese or cobalt coated in glass which makes them easily damaged. Their main advantage over snap-action types is their speed of response to any changes in temperature, accuracy and repeatability.

Thermistors are rated by their resistive value at room temperature (usually at 25oC), their time constant (the time to react to the temperature change) and their power rating with respect to the current flowing through them. Like resistors, thermistors are available with resistance values at room temperature from 10’s of MΩ down to just a few Ohms, but for sensing purposes those types with values in the kilo-ohms are generally used.

Thermistors are passive resistive devices which means we need to pass a current through it to produce a measurable voltage output. Then thermistors are generally connected in series with a suitable biasing resistor to form a potential divider network and the choice of resistor gives a voltage output at some pre-determined temperature point or value for example:

It needs to be noted however, that thermistor’s are non-linear devices and their standard resistance values at room temperature is different between different thermistor’s, which is due mainly to the semiconductor materials they are made from. The Thermistor, have an exponential change with temperature and therefore have a Beta temperature constant ( β ) which can be used to calculate its resistance for any given temperature point.

Another type of electrical resistance temperature sensor is the Resistance Temperature Detector or RTD. RTD’s are precision temperature sensors made from high-purity conducting metals such as platinum, copper or nickel wound into a coil and whose electrical resistance changes as a function of temperature, similar to that of the thermistor. Also available are thin-film RTD’s. These devices have a thin film of platinum paste is deposited onto a white ceramic substrate.

However, they have very poor thermal sensitivity, that is a change in temperature only produces a very small output change for example, 1Ω/oC.

The more common types of RTD’s are made from platinum and are called Platinum Resistance Thermometer or PRT‘s with the most commonly available of them all the Pt100 sensor, which has a standard resistance value of 100Ω at 0oC. The downside is that Platinum is expensive and one of the main disadvantages of this type of device is its cost.

Like the thermistor, RTD’s are passive resistive devices and by passing a constant current through the temperature sensor it is possible to obtain an output voltage that increases linearly with temperature. A typical RTD has a base resistance of about 100Ω at 0oC, increasing to about 140Ω at 100oC with an operating temperature range of between -200 to +600oC.

Because the RTD is a resistive device, we need to pass a current through them and monitor the resulting voltage. However, any variation in resistance due to self heat of the resistive wires as the current flows through it,  I2R , (Ohms Law) causes an error in the readings. To avoid this, the RTD is usually connected into a Whetstone Bridge network which has additional connecting wires for lead-compensation and/or connection to a constant current source.

Thermocouples are thermoelectric sensors that basically consists of two junctions of dissimilar metals, such as copper and constantan that are welded or crimped together. One junction is kept at a constant temperature called the reference (Cold) junction, while the other the measuring (Hot) junction. When the two junctions are at different temperatures, a voltage is developed across the junction which is used to measure the temperature sensor as shown below.

The operating principal of a thermocouple is very simple and basic. When fused together the junction of the two dissimilar metals such as copper and constantan produces a “thermo-electric” effect which gives a constant potential difference of only a few millivolts (mV) between them. The voltage difference between the two junctions is called the “Seebeck effect” as a temperature gradient is generated along the conducting wires producing an emf. Then the output voltage from a thermocouple is a function of the temperature changes.

Thermocouples can be made from a variety of different materials enabling extreme temperatures of
between -200oC to over +2000oC to be measured. With such a large choice of materials and temperature range, internationally recognised standards have been developed complete with thermocouple colour codes to allow the user to choose the correct thermocouple sensor for a particular application. The British colour code for standard thermocouples is given below.

The three most common thermocouple materials used above for general temperature measurement are Iron-Constantan (Type J), Copper-Constantan (Type T), and Nickel-Chromium (Type K). The output voltage from a thermocouple is very small, only a few millivolts (mV) for a 10oC change in temperature difference and because of this small voltage output some form of amplification is generally required.

The type of amplifier, either discrete or in the form of an Operational Amplifier needs to be carefully selected, because good drift stability is required to prevent recalibration of the thermocouple at frequent intervals. This makes the chopper and instrumentation type of amplifier preferable for most temperature sensing applications. 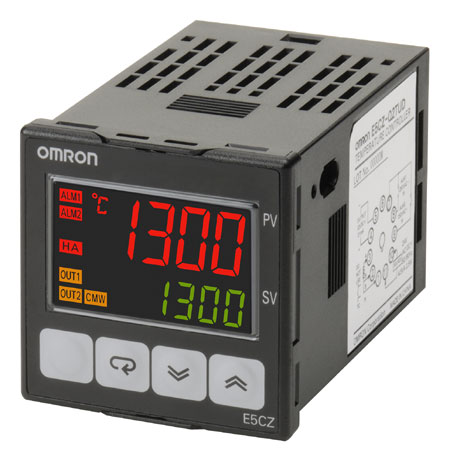